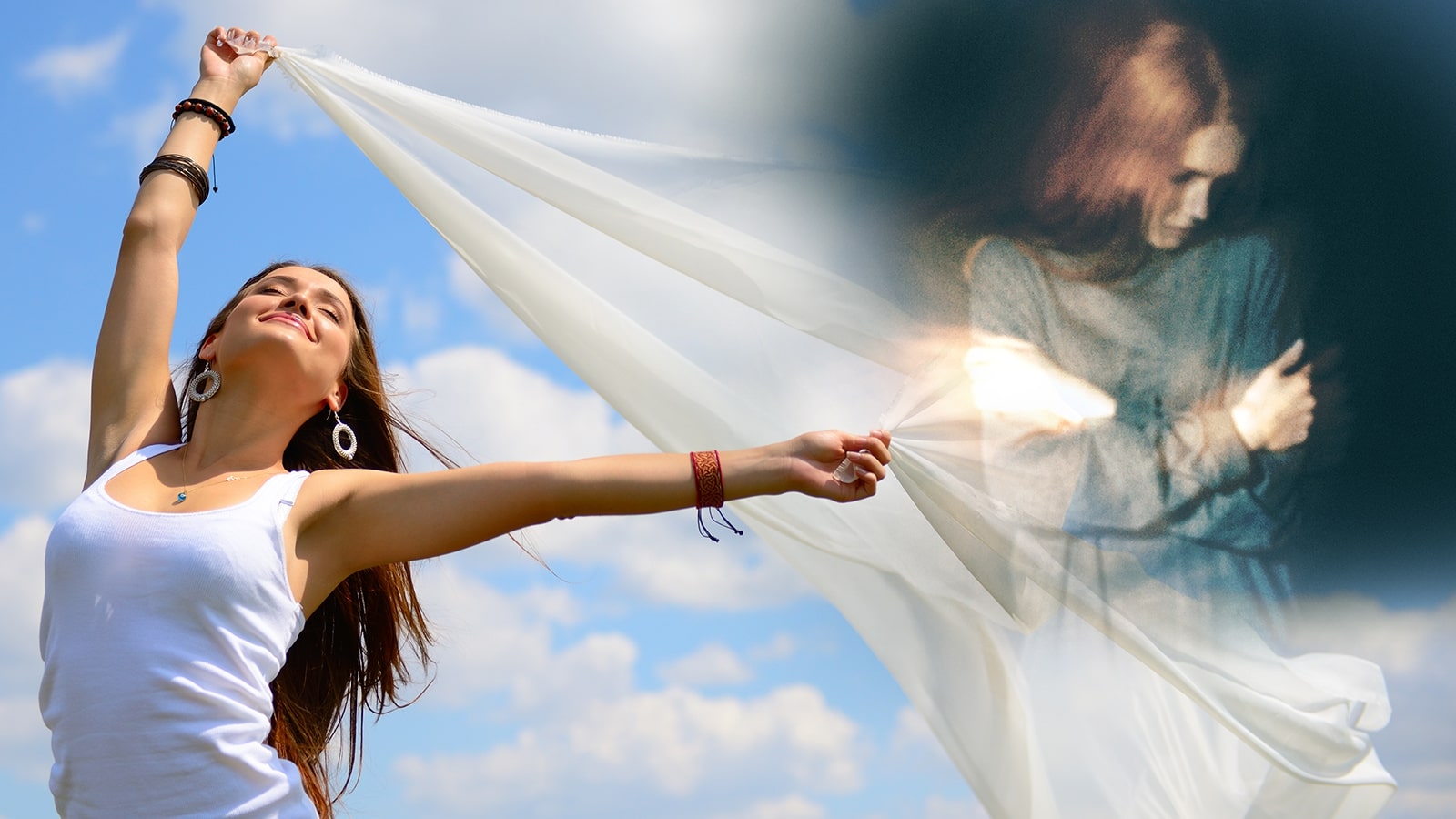 In 2013 I was recovering from a traumatic experience within a relationship, and as I was regathering my identity and deepening my connection to my Creator, it became clear I had a choice—I could claim myself as a victim or I could take responsibility for how I ended up in the situation I was in.

It was easy to say I was a victim of a man with mental illness, who tortured and assaulted me, which was true, but I felt compelled to walk with a dignity and self-respect in a way I had never done before. I wanted to take personal accountability for what happened, never again to blame anyone for my life circumstances. However, I didn’t exactly know how to do this.

Within months of my choice, God lead me to a community—Global Community Communications Alliance, aka Divine Administration, aka Avalon Organic Gardens and EcoVillage, aka The University of Ascension Science and the Physics of Rebellion—a unique and cosmic religious order with people from all over the world who take vows to commit their whole life to practice what I am calling “radical accountability.”

This community was founded over 35 years ago by spiritual complements Van / Gabriel of Urantia / TaliasVan and Niánn Emerson Chase. I think they epitomize what it means to be missionaries and servants to the Most Highs. Today it is one of the most successful EcoVillages on the planet, yet it is so much more. It is a prototype for communities of the future, when this age of despotism falls away and a new world is born in Light and Life.

If you look up this community, which I hope you do, be prepared to find controversy—anything as radical as this will stir people up. Many are confronted by the message, so they attack the messengers. For me it only confirms the power of good that is happening here. Didn’t people, after all, crucify the most beautiful soul ever to walk the earth, the Creator of our universe, Jesus of Nazareth?

Many missionaries throughout the ages have made sacrifices that their children did not understand. They felt left out and jealous of the time given to others in service. In their immaturity they believe their parents were not there for them as they should have been.

With radical accountability children will come to know they were born to parents with this calling for a reason and will be humbled and honored by their parents’ striving for ideals and making great sacrifices to follow the Creator’s calling at all costs.

I took my vows in 2014 and took a cosmic name, AvaJaCyone, as part of my walk. I became a Human-Rights Missionary and gave all I have to the whole, and trust God to provide all I need, as over 80 other adults have also done. We live together on 220 acres of sacred land.

We recognize that we have had past lives together on this planet and others, some even starseed from other universes, which the Hopi recognized thousands of years ago, and we are a regathering of the soul tribes. Interesting that we both are in Arizona, the Hopis and us. In 1994 TaliasVan, Niánn, and a few other community members met with Titus Lamson, the oldest living Hopi at the time, about star tribes.

We are a “cosmic family”, and there are thousands spread around the globe who need to come and reunite with the family, to heal and actualize in our destinies together. Van was (after the Lucifer Rebellion) and still is today a guide of the Father to find your way through this rebellious world and to seek your highest destiny. But you have to choose it. As Jesus said, “Many are called, but few are chosen” or choose to follow the calling.

I first discovered radical accountability in the book The Cosmic Family, Volume 1, which we study in our community and is authored by an "Audio Fusion Material Complement", which comes from celestials through Van / Gabriel of Urantia / TaliasVan, a title earned through service to humanity for centuries as the soul of Van, mentioned in The URANTIA Book.

I was raised reading this related spiritual text called The Urantia Book, which was also written by celestials through a human vessel in the early 1900s, so I am familiar with these types of teachings. Some people think anything "supernatural" is nonsense, and I am not here to convince them otherwise—to me it is common sense.

Being a starseed from the planet Alcyone, as I read The Cosmic Family, Volume 1 the Spirit of Truth activated my whole being. It says we each are accountable for the dire state of our planet, and every thought and action moment to moment, life to life, has contributed to the negative vibrations and overt corruption and abuse on this planet. We must work to change, first in ourselves, those things that contribute to the confusion of our world—from jealousy and envy, to lust, pride, anger, manipulation, self-righteousness, addiction, etc. in varying degrees. No one is innocent, but some are more at fault than others.

Being held accountable for our errors and sins is an uncomfortable concept. Now, after eight years of living the lifestyle founded on this truth, I can confidently attest to its validity. If you want to learn more, become a fellow student at The University of Ascension Science and the Physics of Rebellion, which presents some of the highest spiritual understanding on the planet (uaspr.org). Divine Administration is built on the campus of this university, and is our Planetary Sacred Home, for many reasons, all too much to explain here.

Divine Administration is the Spiritual Olympics. Anyone familiar with Olympic training understands this is not for the faint of heart. Very few have the discipline and wherewithal to commit to that level of training. Many who have initially been drawn to or born into Divine Administration have given up because they couldn't take on the level of radical accountability I'm talking about here. Many people have renounced their vows and become “apostates”.

A very few honest souls could admit it was just too hard and they wanted a mainstream life; but most develop personal resentments which seem to consume them, and their deep sense of failure to keep their commitment before God becomes a fuel that powers their compulsive need to blame others. It is a common pattern of victimization, which destroys relationships.

Being a victim is a tempting role, and it is very powerful, but it is an evil power. Those who cheer for these “victims” should be careful not to enable a victim in their lack of accountability.

I have chosen the victim role before, so I know how it works and I have enjoyed the attention myself.

But finally I stopped asking, “Why did this happen to me?” and instead asked, “How did I do this to myself?”

This is not to condone wrong behavior in others, as they are accountable and at times must be punished and made to stop. There are atrocities of abuse around the world, some responsible for the death of tens of thousands of people and some on a smaller scale. Each of us is a part of a collective conscious that has allowed things to get so bad. That is part of radical accountability.

I’ve found an important distinction between abuse and dysfunction, and when it comes to families and personal relationships, often there is more dysfunction than one-sided abuse. This is where radical accountability can truly help to heal the deepest of wounds in our relationships.

I often reflect on victims, particularly those who renounce Divine Administration, and rarely, if ever, do they talk about their shortcomings, how they hurt people, or how they struggled to keep their vows of celibacy before a committed relationship/marriage, and how they resented the rules against illegal drug use and substance abuse and the world’s lures of materialism, vanity, jealousy, competition, etc.

Many have deep pride that prevents them from receiving feedback about their shortcomings, which is an important part of the spiritual exercise we do in our training. We all must look within.

Radical accountability requires much grace and forgiveness, which takes a lot of personal inner work. Once we do this, we can start to see so much good in even those we find most challenging, and as we uphold what is good, we all become more positively actualized together. I’m not saying this is easy or comfortable, because it is not, at least not at first. But it is a powerful cosmic truth!

Divine Administration has a beautiful system of practices for conflict resolution, which is one of the most powerful gifts I have personally experienced. So long I struggled to find my voice in difficult relationships, I enabled and pretended problems away, but now I am able to face the truth with courage by always looking at my faults first, which are many! And then I can bless others with loving discernment of where they can also grow.

I pray these tools will one day be available for the whole world. Yet many are not ready for this, as their pride prevents them from seeking a true solution. So many rather identify as a victim and remain divided, in a culture that puts the victim on a pedestal, and so they find connection and purpose in their wounds.

Since our planet is in the "correcting times" and we are called to radical accountability, I have little sympathy for those who choose the path of false victimization, even if it stems from longing for connection. We can find our true purpose through faith, and we all must get on our knees and ask what that is for each of us. I can confirm that you will hear the answer when you are ready to listen.

It is a beautiful and empowering phenomenon when you refuse to blame and think and speak your responsibility. Whenever blame and resentment come to your mind, counter that with recognizing what you did to contribute to or cause the negative situation. You can track back through a series of choices, conscious and unconscious, if you have the courage to look at it. This can actually go back for lifetimes. Wow!

This is why the Spiritual Olympics is a life-long commitment, because to unravel the web of our intricate dysfunction as a cosmic family takes a long time. But we can do it, if we set our intentions in unity to accomplish that goal. Apostates, who renounce that commitment, give up on the work needed to heal, while self-righteously casting stones.

I call forth those who are meant to be a part of this Good Work to reunite with their cosmic family. But I encourage radical accountability for everyone, as I know it will lead you to your destiny purpose, whether that is to join Divine Administration or to serve elsewhere on the planet.

The deepest personal honesty before our Creator, in sincere desire to do what is best for the common good of all, is what humanity needs. We are doing this in Divine Administration, and the more who come together, the greater the power for healing this world and for manifesting the shift into Light and Life. I bid you come, Yonda (for the cosmic good of all).