Chaos theory is an interdisciplinary theory stating that, within the apparent randomness of chaotic complex systems, there are underlying patterns, interconnectedness, constant feedback loops, repetition, self-similarity, fractals, and self-organization.[1]

The URANTIA book teaches that progress is the watchword of the universe and that divine providence is never in opposition to true human progress. It states: “The providence of God consists in the interlocking activities of the celestial beings and the divine spirits who, in accordance with cosmic law, unceasingly labor for the honor of God and for the spiritual advancement of his universe children.” [2]

Gabriel of Urantia teaches that though there are many theories to the origin of the Covid-19 pandemic, which caused infections world-wide in more than 200 countries, the real cause is actually in our own bodies and the cumulative wrong thinking and wrong doing of humanity. The cure is to return to the universal laws of God that have been given to God-knowing men throughout our history. These laws are also written in our superconscious mind. No society can survive without following them.[3]

Those of Mormon faith believe that the Lord has revealed to his prophets, both ancient and modern, that the “end times” or “end of the world” (Matthew 24:3) does not mean the physical end of the planet Earth nor the extinction of human life upon the earth. Rather, they believe that “end of the world” refers to the end of wickedness (the end of ungodliness and “worldliness”) on the earth, thereby permitting peace, health, and happiness to flourish.[4]

The signs of the times are all around us. The sixth mass extinction is accelerating faster than expected. Humans have wiped out hundreds of species and pushed many more to the brink of extinction through pollution, wildlife trade, habitat loss, and use of toxic substances.[5]

The polar ice caps are melting six times faster than in the 1990s. At least 400 million people living in coastal communities will be increasingly impacted by rising sea levels.[6]

The world is in a state of climate-crisis denial, ignorance, and unawareness. The gap is widening by-the-minute regarding what needs changing and what is being done. Continuous natural disasters are taking place across the globe: wildfires, heatwaves, flooding, hurricanes, storms, thawing of permafrost, and collapsing of glaciers and whole ecosystems. Many lives and livelihoods have been lost.[7]

Since 2016, most major climate and environmental policies in the U.S. have been dismantled due to being characterized as burdensome to the fossil fuel industry. Protective policies were reversed, or weakened, for wetlands, wildlife, vehicles, and power plants.[8]

In the first half of 2020, SARS-CoV-2—the new coronavirus behind the disease Covid-19 infected 10 million people around the world, and is continuing. Despite ample warning, the U.S. squandered every opportunity to control it. A bloated, inefficient health-care system left hospitals ill-prepared for the ensuing wave of sickness. Racist policies that have endured since the days of colonization and slavery left Indigenous and Black Americans especially vulnerable to Covid-19.[9]

“Black-Lives-Matter-Global-Network” was founded in 2013 as a global network/call to action to counteract acts of violence inflicted on Black communities by state-sanctioned racism. The network is committed to affirming the humanity and contributions by Black members of society and their resilience in the face of deadly oppression.[10]

As a result of the Covid-19 pandemic, 120 of the world’s largest telescopes, and many smaller telescopes, have been shut down for an indefinite period of time. Only a handful of large optical telescopes remain open and most of the world’s astronomers have been unable to keep an eye on the sky. [11]

In spring of 1969, the song, “Aquarius/Let the Sunshine In” peaked as the Number 1 song. The lyrics of the song foretold the transition from the astrological age of Pisces to the Age of Aquarius (the age of love, light, and humanity).[12] In Continuing Fifth Epochal Revelation, The Aquarian Age is also known as the “First Stage of Light & Life.” The First Stage of Light & Life is concerned with families, the group, and a “union of souls” living in cooperation. Materialism and competition become a thing of the past.[13] 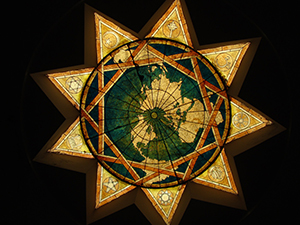 Those of the Baha’i faith view major world religions as chapters of an ever-unfolding book, which is the revelation of God. While social teachings may differ between religious traditions, at the foundation of all religions is a common set of spiritual principles: be kind, be just, be truthful, be generous, be compassionate, and the like. To Baha’is, it does not matter what religion one identifies with; it matters to what degree one reflects these spiritual principles.[14]

In 1970, Cass Elliot sang a song called “There’s a New World Comin”, which foretold that the current one is coming to an end, and “There’s a brand new mornin’, rising clear and sweet and free. There’s a new day dawnin’ that belongs to you and me.”[16]